Canada is a confederative state which unites ten provinces and three territories. The economies of each province or territory are very different, so their labour market needs are also very different. For that reason, every Canadian province developed its own immigration programs, known as Provincial Nominee Programs (except the Province of Quebec, which has a separate immigration system, and Nunavut, which does not have its immigration program). Those programs allow provinces to nominate immigrants that will better meet the needs of the province.

How many immigrants come to Canada via PNPs?

The number of immigrants via PNP in each program depends on the quota allocated by the Federal government. The provincial nomination grants candidates an opportunity for permanent residency in Canada. 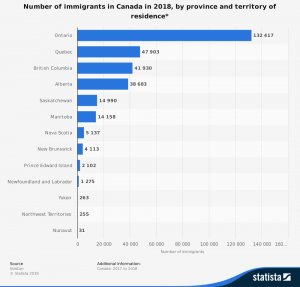 Many provinces had aligned some streams of their Provincial Nominee Programs with the Federal Express Entry system. For those programs linked with Express Entry, Nomination of the Province grants an additional 600 points, which in turn almost guarantee the Invitation to Apply (ITA) for the permanent residency. At least one-third of all economic immigrants come to Canada via PNPs.

In 2018, Immigration, Refugees and Citizenship Canada allocated a quota of 55,000 nominations for Provincial Nominee Programs. In 2019, the government increased the quota to 61,000 nominations.

Do you want to immigrate to a specific Canadian province?

Is your occupation in-demand in one of the Canadian provinces or territories?

Performance Immigration specializes in the Provincial immigration and will help you assess your chances for immigration via Provincial Nominee Programs. Contact us for details!

Canada created an online system that allows foreign nationals to…

Canada offers its residents free health care, an accepting and…

Canada is a confederative state which unites ten provinces and…

Quebec is the only solely French-speaking province of Canada. In…

Canada is one of the most desired destinations for international…

Canada is a country of immigrants. In order to sustain…

Performance Immigration Canada
4.3
Based on 3 reviews

We would like to make your Immigration or Education experience easy and pleasant! We will help you to make your dream come true!